Posted on February 6, 2012 by John Colasante 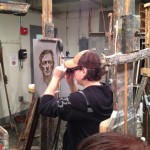 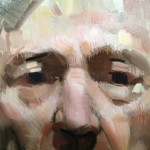 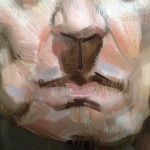 I had the privilege to attend the sold-out David Kassan workshop at the Art Student’s League for the week of Jan 30-Feb 3, 2012 (Monday-Friday). David is an acclaimed and widely respected contemporary realist painter and a personal friend of mine, yet I didn’t know much about his method. So I took the workshop to find out more about his techniques and more about him as a painter and teacher. I was not disappointed. David is unique in that he can freely hold a conversation and paint at the same time making his demos especially informative. His relaxed and easy-going style belies his exacting, nearly-perfect observation skills, honed over many years of painting from life. There are few draftsmen that can compete with his ability to render a subject more perfectly from life and so quickly. There are no secrets here, these are skills one can only master after tens of thousands of hours at the easel, staring at live models.

One cannot rush into that. But I can relay a few things a learned that might be of interest to the curious student of painting. This is no substitute for watching this young master in action. The words do not do justice to watching David demo.

David uses mostly Vasari colors. David uses binoculars extensively to help him isolate shapes (both light and dark) at every stage of the painting.

I think the key to David’s painting method is as follows:

1. First he draws with the small Raphael Mongoose brush (I think it was a #4 or #6 max) and a dark brown mixture thinned a little with walnut alkyd (He uses no turps at all at any point). His observation skill is so finely tuned so the drawing evolves very quickly and to a very high degree of accuracy in the very early stages; he gets the composition, proportions and likeness down in the first or second pose. He uses relative measuring and chooses an anchor point like the bridge of the nose and works out from there. He thinks measuring with an outstretched arm is too inaccurate so he never does it. David draws loosely with straight lines at first and is constantly aware of the drawing and moving things around throughout the early stages. He also separates light/dark at this stage and blocks in the main shadow shapes paying no attention to facial features, etc. David may knock back or blur his drawing a few times using a squirrel hair brush.

2. Once the initial drawing is complete he goes to the next phase he calls “broken color”. Using the same mongoose brush and walnut alkyd he lays down tiles of color onto the drawing very quickly. There is little or no blending with the mongoose at this stage – just tiles. This is meant to be a sort of underpainting. Here he concentrates on warm/cool relationships. He uses alot of blues and greens because in the later stages he wants these colors to show thru like real flesh. At this stage he is thinking about the “light shapes” and further refining the drawing. He makes use of his three “white tints” which are the Vasari colors Brilliant Yellow Light, Rosebud and Video Blue extra pale. David tries not to use pure white on the canvas, instead he uses these colors. Like the first stage, this broken color stage gets done quickly, within a few poses. The drawing continues to evolve at this stage. At various points he may knock back or blend the tiles slightly with a soft brush.

3. The next phase is where all of the time is spent. Using only a #2 kolinsky round sable, David will spend the rest of the time hatching on top of the broken color. It may seem that this is a very slow laborious process, but it goes much faster than you think. The drawing also continues to get refined. He works the whole painting together at the same time, moving around from one section to another. Apparently the hatching is similar to the way egg tempera is done. The drawing is still getting better and better even at this stage, and David isn’t afraid to move a mouth or nose at this stage. David says the painting can go on forever, further refining and detailing to bring out the “truth” in the subject. So there is no time limit. It can take months depending on how far he wants to take it. At the later stages he starts introducing stand oil which he says is good to increase the luminosity. He also uses a small sable to soften or blend the cross hatching. At the start of the next painting day, David may sand down the panel with 600 grit wet/dry sandpaper which has been wet with alkyd medium to remove any raised brush strokes and dust.

That’s it. I hope this was helpful to understand David Kassan’s method.

This entry was posted in Materials, Portrait, Technique. Bookmark the permalink.